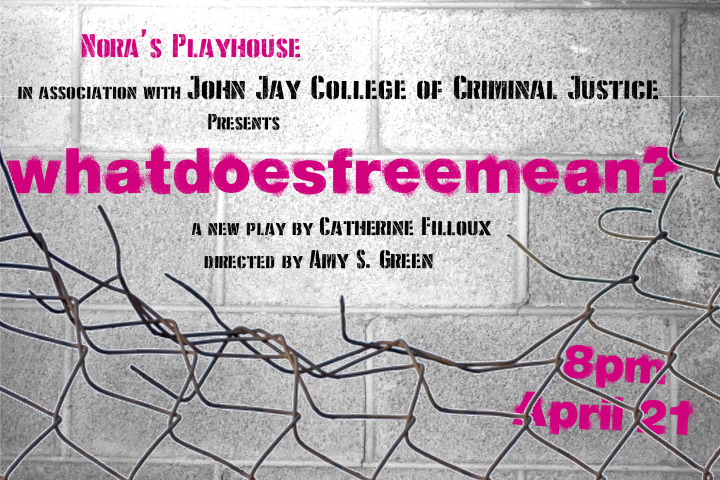 Nora’s Playhouse is pleased to announce the first public reading of whatdoesfreemean?, a new play by award-winning playwright Catherine Filloux. Developed in collaboration with Nora’s Playhouse and the John Jay College of Criminal Justice, whatdoesfreemean? takes us into the cell and the mind of its central character, Mary, an African-American woman who is serving time for an undisclosed crime. Her days in solitary confinement are spent trying to keep her sanity in the face of loneliness, indifference, human cruelty, and loss. As she grapples with internal voices that threaten to loosen her grip on reality, anger, outrage, strength, and humor carry Mary through her period of incarceration and beyond.

Mass incarceration is an acknowledged crisis in the United States. Most public attention has focused on prisoners who are men, but women bear the brunt of the consequences when they or the men in their lives are sent away. More than 205,000 women are incarcerated in America today. Most of them are mothers, and many of them are first-time offenders. But the statistics don’t capture the enormity of the impact mass incarceration has on women as inmates, grandmothers, wives, daughters, sisters, girlfriends, social workers, and activists.

Playwright Catherine Filloux and Nora’s Associate Artistic Director Amy S. Green have been exploring the topic for more than a year, co-teaching a course on the topic in John Jay’s Department of Interdisciplinary Studies.

About Catherine Filloux: Author of more than 20 plays and opera libretti, including Selma ’65 (still touring), Kidnap Road (in rehearsal), Lemkin’s House; winner of the 2015 Planet Connections Activist Award; currently working on a commission for the Vienna State Opera, the libretto for composer Olga Neuwirth’s Orlando