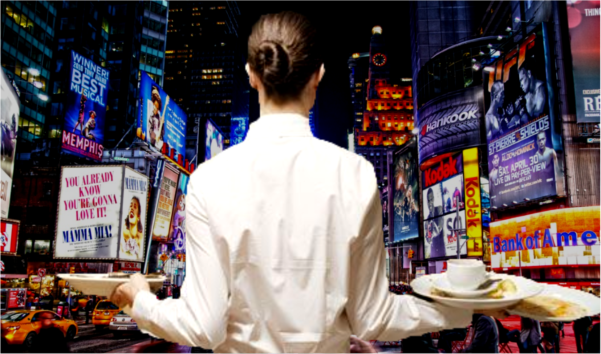 Our next gathering of The Nora Salon is Friday, March 29th in NoMad, Manhattan! We hope you’ll join us for a glass of wine, friendly conversation, and an informal reading of Donna Kaz’s full-length play with music: Waiting.

A parody of Broadway and the New York City restaurant business, Waiting begins as Lucy, a young actress from a small Midwestern town, steps off the bus in Times Square ready to pursue her dream of being an actress. She immediately lands her first job on Broadway–waiting on tables in a restaurant. All of the waiters at The Great White Café are actors, too, each one desperate to land a job in the theatre, yet unconsciously addicted to the performative aspects of waiting on tables. Who needs a part in a play when you have a job at which you “perform” with energy and speed combined with sincerity and pathos? To make matters worse, the Café’s manager, Howard, is a sexist bully who despises artists and does everything he can to make sure his team never escape into a world where actors earn respect. Waiting is set during a not-so-long-ago-era when women had to buck up to being harassed or lose their jobs and asks the question: Can actors who are New York City waiters ever play any other part?

Space is extremely limited. Reservations are required.
Please email us at reservations@norasplayhouse.org to add your name to the guest list.

You’ll receive the exact address and directions in a separate email when your reservation is confirmed.